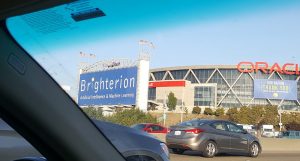 In an earlier posting, I explained some of the reasons for the resurgence of AI and the interest in machine learning. Since then, major companies have invested even more in the technology, venture-capital backed start ups abound, and press releases and technical papers are regularly issued on astonishing results, such as AlphaGo, the system developed at DeepMind which plays the game of Go. (Go has been one of the grand challenges of AI due to its ‘branching factor’ — the expansion in the number of possible game states as a player considers potential game futures.)

I was caught off guard by how rapidly the situation has gotten out of control. Professors working in machine learning are regularly taking extended leaves of absence to form start ups and those start ups are rapidly being acquired by the tech giants simply for the brainpower. The most famous such story involves a leader of the field who formed a bogus company simply in order to justify the price of his ‘acquisition.’

Even though more and more of my colleagues have headed toward industry opportunities, the dramatic rise of machine learning was brought home to me last week when attending the 2016 Neural Information Processing Systems (NIPS) Conference in Barcelona, Spain.

The first official NIPS took place in 1989, and it was held in Denver through most of the 1990s. It was first located in the Tech Center and then moved downtown. I chaired the meeting in the mid 1990s. The conference was a committed core of about 500 researchers, and we would head up to the mountains after the main meeting and hold workshops in the morning and evenings and ski during the day. The vast majority of conference attendees were academics, with a few government and industry think tanks participating. The conference occasionally received sponsorship from government organizations, and it wasn’t until the late 1990s that corporate sponsorship began, with only a few companies participating each year. (One of the very first corporate sponsors was Athene Software, founded by Eric Johnson, the CEO of AnswerOn. Athene was committed to connecting with academic researchers and adopting the latest research results.)

Flash forward to 2016. This year’s meeting had nearly 6,000 attendees. Attendance would have been higher but registration had to be capped due to room capacity limits and fire regulations. Here’s a bar graph of attendance at recent conferences. 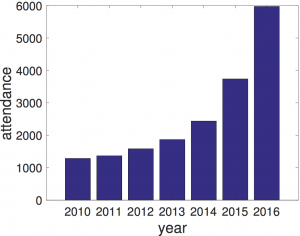 Several of us tried to predict attendance this year based on the historical data, which seemed like an appropriate activity given the nature of the field is to make predictions from historical data. I should admit that I under-predicted by about 10%. The conference attendees now include software engineers and data scientists (whatever that is) who hoped to be introduced to state-of-the-art machine learning. Far more of the badges had company names than academic affiliations. Google, DeepMind, and Facebook were present in force. Rumor is that between Google and its subsidiary DeepMind, 500 employees were sent to the meeting. The clever @ML_hipster tweeted this projection of NIPS attendance: 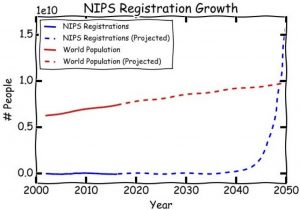 There were signs that the machine-learning hype is out of control. I was amused by chats with employees of a well-funded start up that lacked any expertise in AI or machine learning and whose overconfident employees were unsure of the company’s mission or what they would build. (Supposedly, the CEO offered the employees a large bonus if any of them could produce a result that would be worthy of publication. Contrast this low bar with the competence of Google, which surely has hundreds of employees who have contributed to research literature.)

Another story: A venture capitalist looking for new talent made up a bogus company, RocketAI, simply to host an off-the-hook party to draw in the best and brightest. Doesn’t that sound like a gag out of the TV show Silicon Valley?

And the best story of all: An officer of a leading tech firm that appears in the news daily showed up expecting to register on site. He was told by the NIPS staff that registration had been closed for weeks. When he tried to impress the staff of his importance and need to enter to recruit, he was asked why his company had not considered sponsoring the conference. (NIPS had more than 60 sponsors, and smaller sponsors had to be turned away due to lack of exhibition space.) Apparently, he offered a sponsorship on the spot and received the admission badges associated with sponsorship. However, four days after this incident took place, payment had not been received.

Unfortunately, many of us who are long time attendees are disappointed. We have used the conference to bounce around ideas and have conversations with leaders of the field, but that is becoming less and less feasible. For example, I spoke in a symposium, which is intended to be an informal setting to describe work-in-progress, and over 2500 folks participated. It was extremely intimidating, considering the idea I was excited about has yet to prove itself worthy. (I was hoping to get useful feedback, and did get a few leads.)

So is this a bubble? Will the conference continue to grow exponentially? Next year’s meeting will be held in Long Beach. I suggest you register as early as possible to find out. The venue cannot handle many more attendees than this year’s venue.